Leying the Duke to Rest

In 1846, the Rev. Edward Duke published a book called The Druidical Temples Of The County Of Wilts. In this book he proposed that various ancient sites on the Marlborough Downs and Salisbury Plain represent the construction of a giant "stationary Orrery" built on the land. Duke asserted that, not only were the distances correct, but that all except one fell on a straight (ley) line. This notion has been revived and extended by modern newage "alternative thinkers". Let us properly examine these claims.

One of the many curiosities of Duke's "cosmology" is that the Moon orbits the Sun!

This has since been "updated" to include other planets, etc.

[1] As is typical of "alternative thinkers", the exact location in Cotmarsh is not given. The purpose of this vagueness is an attempt to make the claims difficult or impossible to either falsify or verify. It is a standard pesudoscientific ploy.
[2] The exact location is again vague, and is sometimes given as various barrows on Hengistbury Head, which is adjacent to the harbour. Others claim that it is in the harbour itself, as befits the god of the sea. It's probably better not to ask how it was known, in antiquity, that 19th Century Europeans would choose the name "Neptune" for this planet.
[3] The claims vary from "Birmingham" to "near Lickey End" (no, I promise I did not make that name up! [grin]) to "the base of Lickey Hill" (which is over 1 km long!).

It is possible to establish the central positions of most of these sites to a precision of 100m using 6-figure Ordnance Survey grid references:

SP and SZ are the 100km sheets due north and due south respectively of sheet SU.

Now, the useful thing about OS Grid Refs is they make it extremely easy to establish distance and direction. Simply putting the grid references into a CAD program plots the points, and the dimensioning tool will give distances and angles. Ley lines are supposedly straight. Obviously, exactitude is impossible to achieve, so what would a reasonable tolerance be? With the unaided eye, it is trivial to notice a misalignment greater than the thickness of a little finger held at arm's length, so it would not be unreasonable to expect alignments to fall within that, so we shall use that as our allowable tolerance: 0.5º. For distances, let us allow a generous tolerance — say 10%. Plotting the points supposed ley line gives us this: 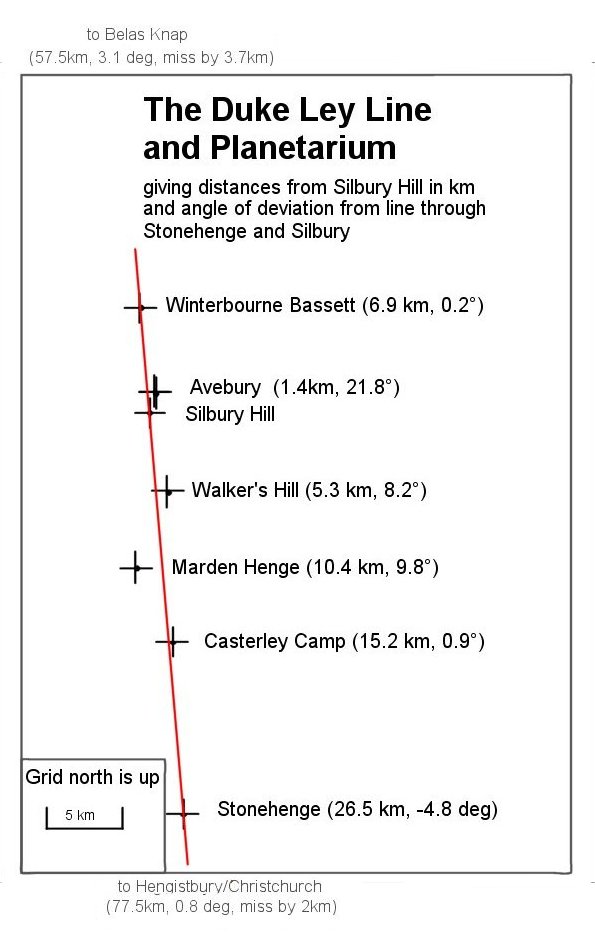 Taking a base line from Stonehenge to Silbury, we can see that the only other point that falls within our tolerance is the circle at Winterbourne Bassett. Marden Henge is acknowledged to be "off", but the others are supposed to be on the line. They aren't! (The red line has a scale width of 30m).

So, the straight line hypothesis is falsified, but what about the distances? Surely they must fall within 10% of some accepted values. From the above data, an Astronomical Unit (1AU), i.e. the mean separation of Earth from the Sun, is represented on the ground orrery by 1.4 km. We can work out from this what the distances on the ground should be and compare them to the distances of the chosen monuments:

It is blatantly obvious from the above that there is no relationship between the distances in the two columns and I suggest (i.e. this is a challenge to "alternative thinkers"!) that no consistent method exists of deriving one set of figures from the other.

In short, what we have is a complete nonsense. It is just another one of the many ways in which unscrupulous "mystery mongers" exploit the ignorance and gullibility of their "marks". Shame on them!