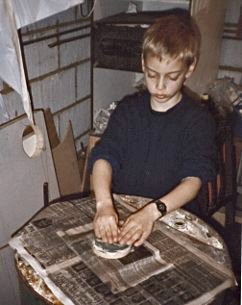 Timmo ground the mirror on a disc cut from ordinary bathroom tile. I didn't keep a close enough eye on him, and the mirror was rough ground to about f/5 rather than the intended f/10! After discussing the relative merits, we decided to stick with the shorter telescope. This meant that we could not leave the mirror spherical, as I had intended, but that I had to figure it for him once he had polished it out.

We made the lap on a tool of dental plaster, as shown in the photograph. 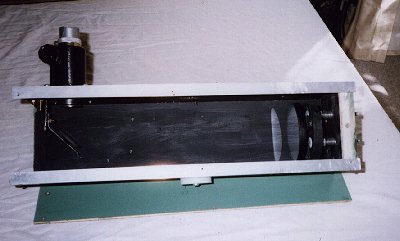 Some detail of the innards is visible here. One lesson from this photograph is the reflectivity of matte (flat) black paint. Despite looking jet black in ordinary light, the flashgun shows it to be quite reflective. Note, in particular, the light reflected off the mirror onto the side of the telescope.

The mirror cell has the three adjusting bolts at the apices of an isosceles right-angled triangle. This makes collimation much easier than the usual equilateral triangle arrangement.

The secondary holder is a single aluminium stalk. It has a slot to allow movement along the axis of the focuser and another one for movement along the tube. Other adjustments are made by bending the stalk -- kludgy, but it works.

We constructed a tripod-mounted Dobsonian-type altaz mount. The bearings are plastic discs cut, with a hole-saw, from a chopping board, running on teflon pads. The altitude bearing is very light: you can blow the telescope to a different altitude. The half clothes-peg is for "clamping" it in altitude. 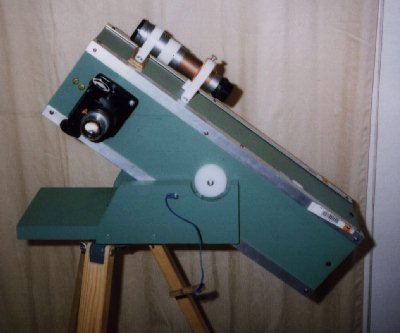 Or, alternatively, it can be used as a "laptop". This means it can be taken out and "set up" very quickly. Timmo is much more intuitive than I when it comes to locating objects with it like this, without the finder. 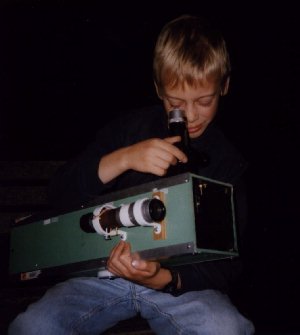 Also in this image, details of the finder-mounting are almost visible. The front pipe-bracket is a tight fit on the tube; the rear one has two adjusting screws at right angles. Elastic bands tension the finder against the adjusting screws. It is much easier to align than the bog-standard 3-screws-at-120° configuration.